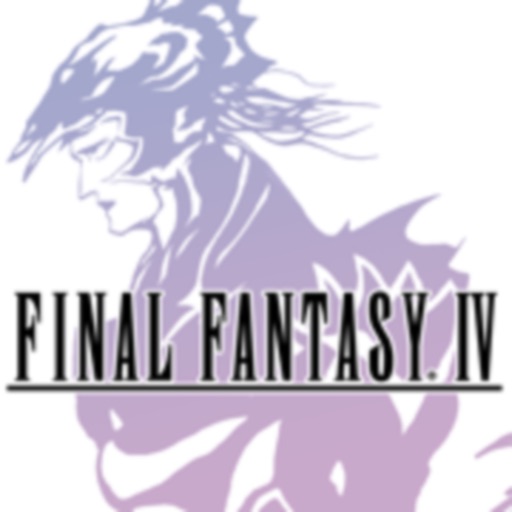 The original FINAL FANTASY IV comes to life with completely new graphics and audio as a 2D pixel remaster!

A remodeled 2D take on the fourth game in the world-renowned FINAL FANTASY series! Enjoy the timeless story told through charming retro graphics. All the magic of the original, with improved ease of play.

The Kingdom of Baron sent their elite airship fleet, the Red Wings, to attack the surrounding countries. Distressed by his mission, Cecil, a dark knight and captain of the Red Wings, decides to fight against the tyrannical Baron with his trusted friend and his paramour at his side. In his search for the crystals, Cecil must travel over land, under the ground, to the Land of Summons, and even to the moon. Join forces with Kain the dragoon, Rosa the white mage, Rydia the summoner, and many more skilled allies.

FFIV is the first title to introduce the dynamic "Active Time Battle" system, where time moves even during battle, giving the players an exciting sense of urgency.Thanks to the wide appeal of the game, this revolutionary system would be implemented in many future titles in the series.

*One-time purchase. The app will not require any additional payments to play through the game after the initial purchase and subsequent download.
*This remaster is based on the original "FINAL FANTASY IV" game released in 1991. Features and/or content may differ from previously rereleased versions of the game.

■ Alterations relating to battles
*Fixes to a bug where enemy action speed would become slower than originally intended in some situations.
*The length of time taken before the first action is made has been reduced for both allied and enemy characters.
*The amount of EXP received from enemies has been slightly reduced overall.

There is a possibility that the above three changes will make battle difficulty feel slightly harder than before.
We are very sorry to make updates that affect the overall game balance in this way, but they are intended to fix bugs to bring the game’s behaviour closer to how it was originally intended, and also to allow new players to experience the game in the best state possible.
Thank you for your understanding.

*The enemy item drop rates have been adjusted so that rarer items are now dropped more frequently.
*Some flying enemies have been animated to hover up and down in the air.
*A visual effect was added where the screen flashes if an allied character’s attack scores a critical hit.
*The time taken when transitioning between screens after escaping from battle has been reduced.

■ Alterations relating to maps and events
*Alterations have been made so that weapons and armour are sorted into attack (or defence) power order within their type category when using the auto-sort function on the menu screen.

■ Bug fixes
The following bugs have been fixed.
We sincerely apologise for any inconvenience that these issues may have caused.

＜Battle related issues＞
*Battles would sometimes not progress correctly under specific circumstances.
*Some enemies would act unnaturally under specific circumstances.
*Sometimes odd actions would be initiated when using auto-battle under specific circumstances.
*The “Reflect” effect would sometimes inflict more damage than intended on the enemy when multiple characters reflected magic back at them.
*The “Cover” ability would trigger against some attacks that did not inflict damage or for “Petrified” allies when in a near-death state.
*Cecil would trigger the “Cover” ability when equipped with the weapon “Avenger” and in a “Berserk” state,
*Sometimes an allied character in the “Confuse” state would behave unnaturally when performing certain actions.
*Sometimes the effect duration for the “Stop” status would not be updated with overlapping applications of the same status.
* Sometimes the countdown for “Doom” would slow down.
*”Security Eye” and “Searcher” enemies would use “Alert” as a counter against “Steal”.
*The enemy skills “Diamond Dust” and “Tsunami” were more powerful than originally intended.
*Sometimes the graphics for defeated enemies would not disappear under specific conditions.

＜Map and event related/ other issues＞
*Depending on scenario progression, it could become impossible to travel to the Underworld on the Enterprise.
*Sometimes some event scenes would not display properly under specific circumstances.
*Some text was not displayed in a suitable manner.
*Some graphics were not displayed in a suitable manner.
*Under specific circumstances character behaviour and graphical presentation would act unnaturally.
*Some BGM and SFX were not played correctly.
*The playtime information for some of the music tracks on the Music Player was incorrect.
*Sometimes it would become impossible to proceed after transitioning to the Monster Bestiary map screen under specific conditions.

Fixes to other minor bugs.
Further updates are planned in future.