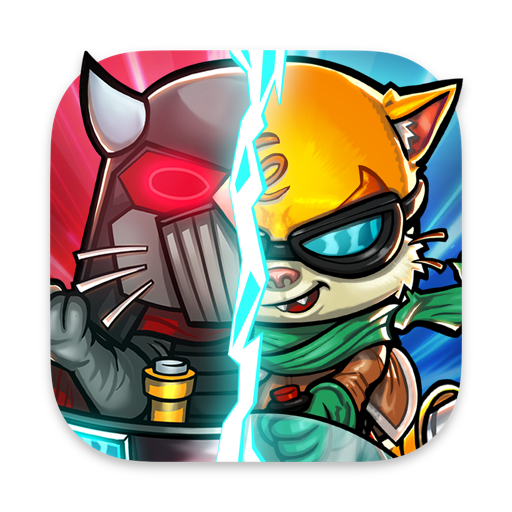 Explottens is the most accessible and cat-friendly Shooter ever to appeal to more casual players and redefine bullet hell shoot 'em ups. It’s a bullet hell, side-scrolling arcade shoot ‘em up where the controls are fluid, the explosions are big and the bosses are bad & epic. A clash between the good and the evil kitizens of Katmandu. Experience classic shoot ‘em up gameplay where each mission and each boss is uniquely handcrafted. Cats buckling up and off to shoot some naughty meows is the Explottens way.

- ACCESSIBILITY: We're in the process of making Explottens the most accessible arcade game. Now you can customize the game features according to your taste and mood. For instance, if the explosions are getting a bit too overwhelming simply turn them off in the settings menu. As customization is the new cool...As the cats say may you have a puurrfect brawl?


- ASSISTIVE MODE - We listened to our Explottens fam and of course our Kitty cat party and made it the most assistive arcade game there is. Turn on Auto Aim and give your thumb some rest. Maybe listen to some music and get ready to get hooked.


- EXPANSION ISLAND - For the players who are done and dusted with the first 30 missions and wish for another jolting episode. Keep those seat belts buckled up as we have a whole new Island that is ready to be explored.


- SURVIVAL MODE - Ascend into the skies and test your wits by facing an endless wave of enemies. Hold your target and don't stop shooting till you collect enough coins to upgrade your arsenal. An arcade feels like never before. A clash of the paws.


- UNIQUE MISSIONS - Lots of different missions to play to progress the story from saving civilians to destroying bases to simply taking out tons of enemies. There will be tons of explosions no matter what though.


- SIDEKICKS - Take a trusty cat companion along as they help out with providing cover and some comic relief! And have some kittie nibbles for the way.


- POWERFUL UPGRADES - Tons of upgrades and customizations to take the mayhem to the next level include Front Guns, Rear Guns, Special Abilities, Planes, and a lot of many Sidekicks to choose from. Load thy cannons and let’s go on nasty kitties capturing spree.


For feedback and help email us at [email protected]

HEY CAPTAIN! SOAR IN THE SKIES WITH THE LATEST UPDATE!!

- Experience an optimized user experience with our new game save paradigm with multiple save slots
- Optimized controller navigation and visual controls provide a better and smooth gameplay
- Through the game center building, access the leaderboards, grab the achievements and compete against your friends.
- We had a little shoot out with some bugs so you can have a smooth gaming experience